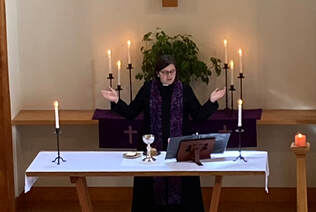 Welcome  our leaders
We are excited to announce that we have filled all three leadership positions  to guide us spiritually, musically and to grow our understanding of God's word for all age groups.

Priest-in-Charge
We spent 2021 in discernment with extensive feedback from our parishioners in order to answer who we are as a congregation and what is God asking to do/be.   With great joy and huge gratitude, we announce that Rev. Amanda Gerken-Nelson has accepted our invitation to be St. Bartholomew’s next spiritual leader.  The Search Committee based its quest on the results of the Discernment Committee’s work, and, as Kathy Abernathy, a member of both said at an early meeting (and we may be paraphrasing here) “when we meet the right candidate, we will know!”  The Search Committee unanimously and enthusiastically recommended Amanda to the Vestry, who accepted their recommendation with the support of both Canon Ambler and Bishop Brown of the Diocese.

Amanda is a Lutheran minister, ordained in 2015.  She has signed a Letter of Agreement to be our Priest-in-Charge for a renewable period of 3 years, beginning January 1, 2022.  The Roles and Responsibilities grid, developed by the Vestry and discussed and vetted by the parish, will be her roadmap for her 20 hours of service per week.  She will lead 3 worship services a month, along with other duties and responsibilities that are outlined in the grid which is available at your request.

After spending two years as the Pastor of Faith Lutheran Church in East Hartford, Connecticut, Amanda has spent the last four and a half years as the Executive Director of Extraordinary Lutheran Ministries (ELM), a nonprofit organization that advocates for and supports LGBTQIA+ leaders in the Lutheran Church in the United States and Canada.

As she said in her introductory letter:  “My calling in life is to preach the good news of Christ’s love, to care for God’s people who diligently seek to live out their grace-filled callings as disciples, to wrestle with God’s people as we explore the scriptures and ponder what holy texts are being written today, to administer the sacraments as they reveal God’s presence in our lives:  I am called to be a pastor.”  And so, she responded to our posting.

Amanda and her wife, Tasha, live with their 1 year old son, in their home in  Portland.  Amanda began her time with us on January 2, 2022.  We know that you will feel as hopeful and confident of our future together as the others of us who have met her feel.

We are deeply grateful to John Duncan who led both the Discernment and Search Committees in their work.  Kathy Abernathy, Michele Johns and Susie Soule served on both committees.  Other members of the Discernment Committee were Pam Hobson, Tom Hyndman, and Mike Perfetti, with the extraordinary assistance of Peter Small who conducted so many valuable interviews with parishioners.  Other members of the Search Committee were Anne Berg, Jan Burson, Sarah Fischer, Lucia Hunt, and Gary Sylvester.  Thank you, one and all, for your prayerful, focused, hard work!

Organist and Choir Director
​The Music Director Search Committee is delighted to announce the appointment of Dr. John Schuder to serve as our Organist and Choir Director. John recently retired from a similar post at St. John’s Lutheran Church near Columbus, Ohio, and moved to Maine. Prior to his twelve years in Columbus, John served for thirty-five years at a church in Scarsdale, New York. He has earned degrees in music from several institutions, including a Doctor of Musical Arts degree from the Julliard School of Music in New York, and a Master of Sacred Music degree from the Yale Institute of Sacred Music in New Haven. John has many years of experience directing choral groups.  We are joyful to hear John's beautiful playing on the organ and at being able to sing again as a choir with carefully thought out rules for maintaining safety for all during the continued pandemic.
Youth Education Leader
Our Youth Leader, Michelle Betz,  joined us in October and has been busy at work providing seasonally-appropriate materials for our young kids as well as supporting the Confirmation classes for 4 of our youth.  Michelle recently moved to Maine from Maryland where she was education leader for a large church in Baltimore.  Michelle's enthusiasm, love for children and creative ideas are evident in what she has brought to our families during the continued pandemic.   Michelle has organized outdoor activities for our families and looks forward to returning to in-person  Sunday School on Palm Sunday.